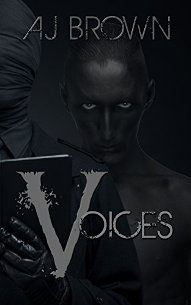 I would like to tell you about the little project  AJ Brown and I are working on.  In the coming months, one character from each story in AJ Brown’s collection VOICES will be interviewed by me!  Hmm… Actually, let me tell you what AJ says about our project:

Since this is an interview, I will go ahead and say up front there are spoilers in each session. If you have not read Voices, I urge you to do so before continuing. If you haven’t read the collection, you have been made aware of possible spoilers.”

So, as the man says, Spoiler Alert!

While this project was originally intended to be a promotional piece, it has taken on a life of its own… or maybe the characters have taken over.  It’s hard to say.   Read Voices, follow the interviews  here and at Type AJ Negative… let me know what you think.

The doorknob is cold to the touch. Lisa let her palm linger as she takes a deep breath. She closes her eyes and gathers her thoughts. Beyond the door are the people she was sent to talk to, to interview.

“You can do this,” she says and takes another deep breath. Forcing a smile, she turns the knob and opens the door.

A room with gray walls and dirty white tiles greets her. The lights overhead are fluorescents and casts dim shadows into the corners where she imagines cobwebs cling to the ceiling and spiders caress the carcasses of dead bugs before eating them. There’s not much in the room. A brown piano along the right wall, its ivory keys yellow and its ebony ones having lost their luster. A table sits to her left, complete with clear plastic cups containing water and various juices. There are no snacks to be seen.

In the center of the room are sixteen folding chairs, each one upholstered with cushions a shade of yellow out of the seventies. Stuck to the backs of each chair is a sticker that says Holly’s Mortuary. Fifteen of them form the shape of a U and are occupied. One of them—the one in the center—is not.

Lisa doesn’t focus on any one of the fifteen people waiting for her, each one in their own little world, recalling the stories of their lives, possibly in vivid details, possibly through hazy clouds of the thing we call forgetfulness. Women. Men. Children. They all turn and look at her when the door closes with a click that is too loud in her ears. Her smile falters, but not for long. She forces it back in place, straightens her shirt and walks toward what she calls The Fifteen. She reaches her chair, turns and sits down.

Scanning the room, she takes in the blank stares, resentful faces, some even with a touch of sadness filling their eyes. She settles on one individual, a young boy in his mid-teens and a pimple on the side of his face. She considers him for a moment. He is not fat, but he is not thin either. Most would call him chubby, something she knows bothers him. He stares at the floor, at his shoes. One of them is untied, the loose ends frayed

“Spencer,” she says and waits for him to look up. When he does, she sees the circle of gray beneath his eyes. “Hi.”

Future interviews will be posted in their entirety.  And I may go back and add the rest here later, but right now I would like to encourage you to visit AJ’s site and get to know him too.

12 thoughts on “Voices: The Interviews 1”