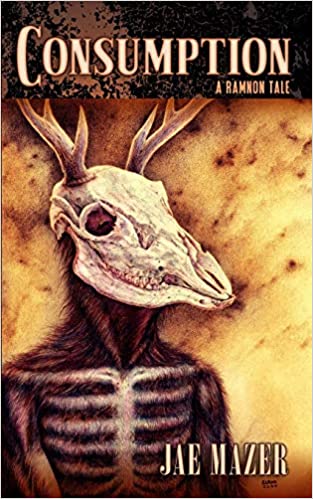 Nell is caught in a toxic marriage, waiting for something to give. Wanting it all to end. But is her husband merely abusive, or is he something else? Something worse?

Consumption is a folklore tale set in the prairies of Alberta, Canada. Join Nell as she scrambles to stay afloat in a crumbling life and abusive marriage, all while navigating the horrors of both a fantastical monster and a notorious killer.

Consumption is another stand-alone installment in Jae Mazer’s Tales from Ramnon, stories centred around the fictional afterlife of Fort Ramnon.

Consumption by Jae Mazer is a dark blend of psychological horror and folk horror. It is brilliant and flowing and transcends its synopsis.

Jae has created frighteningly realistic characters and scenarios within her folk horror tale that will bring everything you think you know into question. The natural and supernatural elements of the story blend seamlessly, creating and engaging and compelling tale. I was struck by the emotion-evoking quality of both the characters and the writing.

The folklore premise in Consumption contains some extreme aspects of horror fiction not always found in folk horror, but these aspects are presented fluidly, without shocking level of graphic gore found in extreme horror and Splatterpunk stories. The result is impactful and emotionally horrifying. I love this story, even though and because it stayed with me and affected my dreams for days. The nightmares were unwelcome and disturbing, but that is a compliment to the author.

This story has wide appeal, and I recommend it as a great read for fans of dark fantasy/urban fantasy horror, folk horror, psychological horror, and supernatural horror as well as general horror fans. A shelf-worthy book for your horror library.
Jae Mazer’s Tales from Ramnon stories are not to be missed.

Get it on Amazon: getbook.at/consumption

About the Author: Jae Mazer

Jae Mazer is a Canadian who was born in Victoria, British Columbia, and grew up in the prairies of Northern Alberta. After spending the majority of her life in the Great White North, she migrated south to Texas. She is a connoisseur and creator of horror, science fiction, and fantasy. Many moons ago, a rampant love of reading led her to believe she could weave a good tale herself, and now she is an award-winning author with ten novels under her belt, as well as stories published in various anthologies.

One thought on “Consumption”